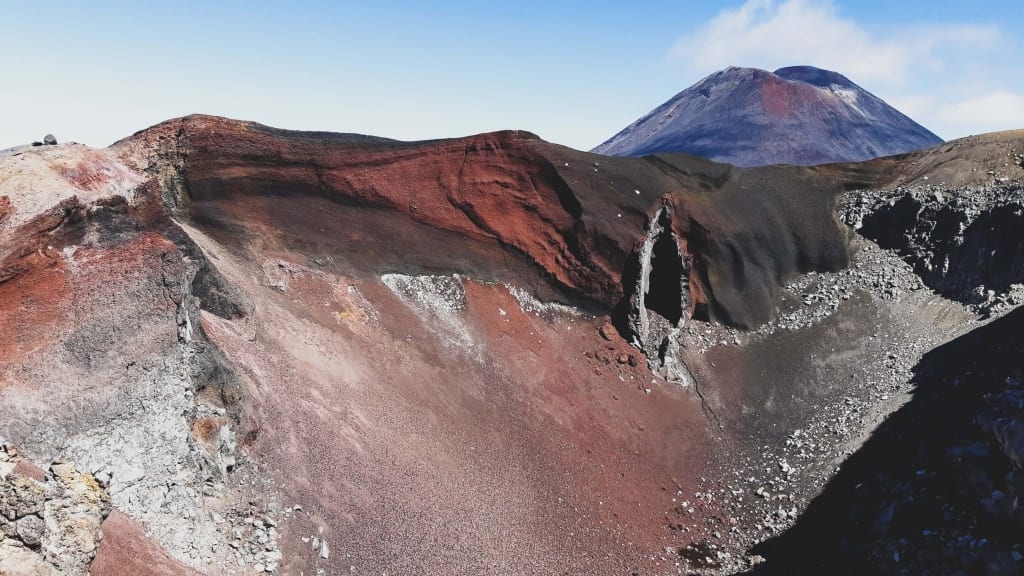 The Northern Circuit goes around Mount. Ngurahoe, or Mt. Doom to some. The Circuit is 46ks. Most people do it in four days, but Jordan and I only had two.

Mt. Ngauruhoe is my favorite of the three mountains in middle New Zealand. I love the shape of the strato volcano, how the clouds hug its top, and how he stares down at me from my room everyday. If I had to choose (and I did, to go around Mt. Ngauruhoe or Mt. Rupehu for the Round the Mountain Trek, I’m a Ngauruhoe girl all the way.

We left Whakapapa (fuck-a-papa) later than we originally planned to avoid some rain. The walk from Whakapapa to the Mongatepopo hut is technically the first day of the Circuit if you’re doing it in four days. I really enjoyed this part of the walk.

Lower Tarankaki Falls Track, having just left Skotel. I remember leaving for the walk, feeling a bit unprepared and running into guests in the lobby who were eagerly awaiting their shuttle bus to take them to the start of the Crossing. Jordan and I had our rain jackets on and were geared up to walk the same distance they were getting a ride. “See you there! But probably not….” we said as we waved and walked out the door.

There were a few others on this leg of the journey. There were two girls who weren’t native English speakers who had to get help from us once when the path was unclear which way to go. There was also a group of friends who were clearly out for a day hike, with their fast pace and tiny day hike backpacks. Then there was the couple from Minnesota we met later, at the bottom of the Devil’s Staircase.

In the photo below you will see our first sighting of the Mongatepopo hut, standing solitary in the shadow of the gorgeous mountains that frame the beginning of the Crossing.

As the morning weather wore off, the day became more and more beautiful for us. We encountered a few people while on the Crossing portion of the track who all enthusiastically told us we did it right by leaving later.

Not only was the weather better, but we didn’t have any shuttle bus company. This time, Jordan and I could take our time to view the sights and rearrange the weight of our backpacks without being caught up in a line of tourist trampers. Opposed to the hundreds of people we did the walk with in January, in March we only saw 15 people on the Crossing – most of them were also doing the Circuit and some were even at our hut that night. 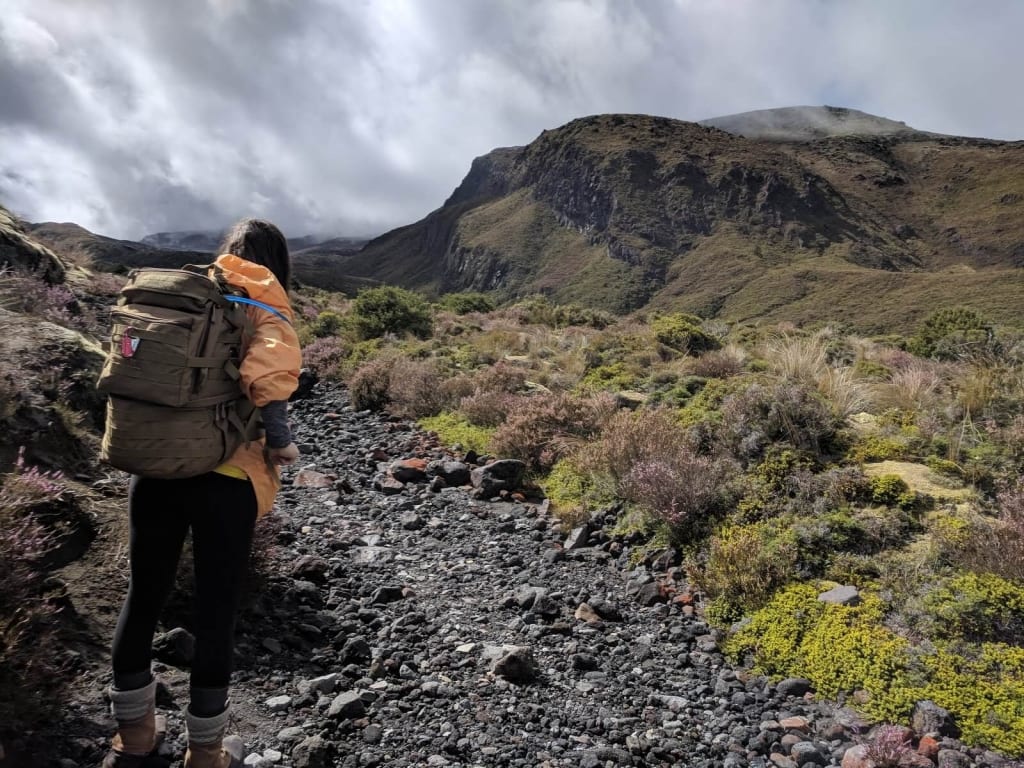 Part of the Crossing goes through lava fields in the shadow of Mt. Ngaurahoe. The volcano’s last eruption was in the year 1977. Can you spot Jordan in the middle photo above? 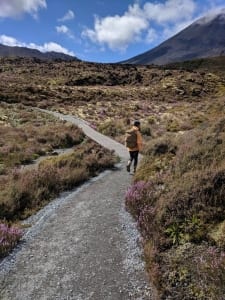 The pictures below are from the bottom and the view from somewhere along the Devil’s Staircase. Aptly named for it’s climb from 1400 to 1600 meters above sea level, the Staircase is the part of the Crossing that I dread.

At the top of the Devil’s Staircase is the South Crater. It feels like walking though deserted desert here.

After South Crater is another climb up to the Red Crater. This one speaks for itself. 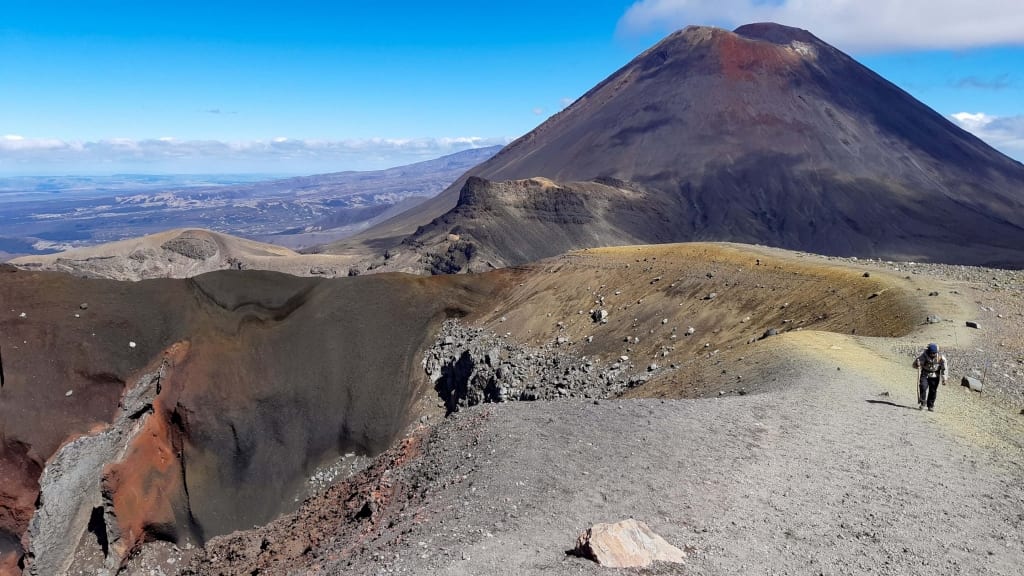 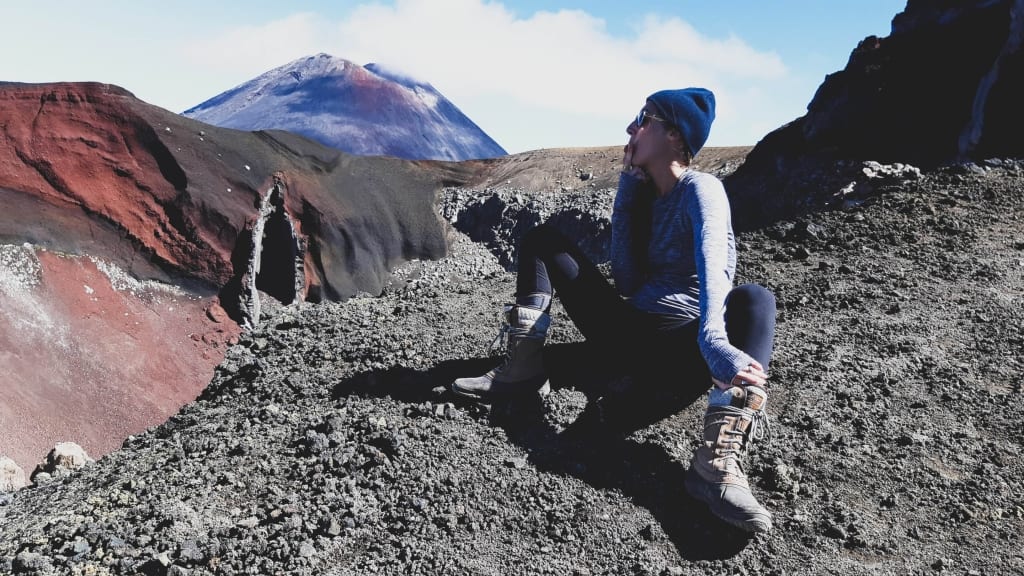 From Red Crater you can slide on down to Emerald Lakes. The first time I did the Crossing it was impossible to get a photo without tourists in it. This time around, more than the numbers of hikers changed. The slide down to the lakes looked washed away. While it was easier to get down, it was a lot less fun, as there were less falling people to laugh at.

The smoke clouds you see are sulfer escaping the volcano. 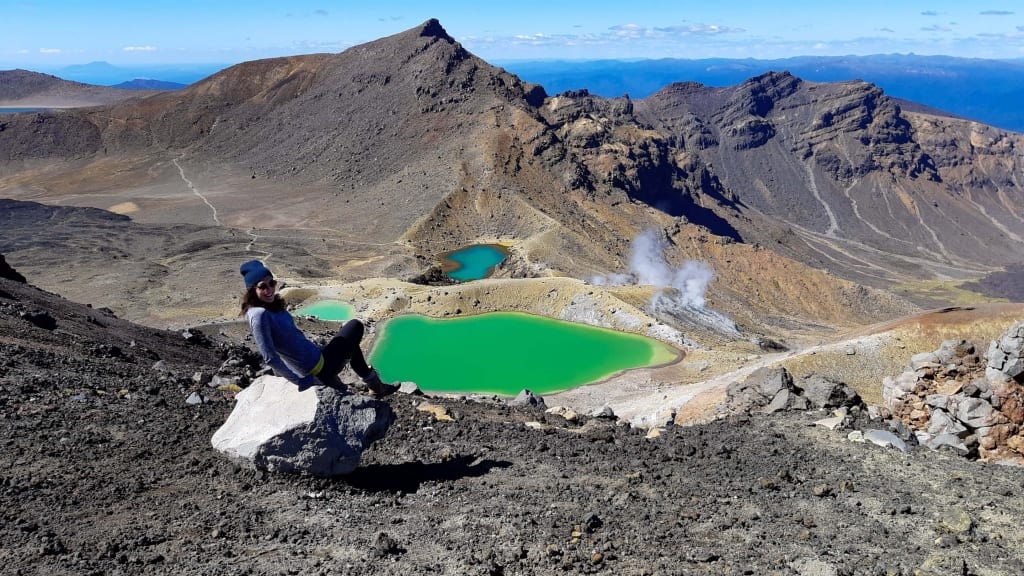 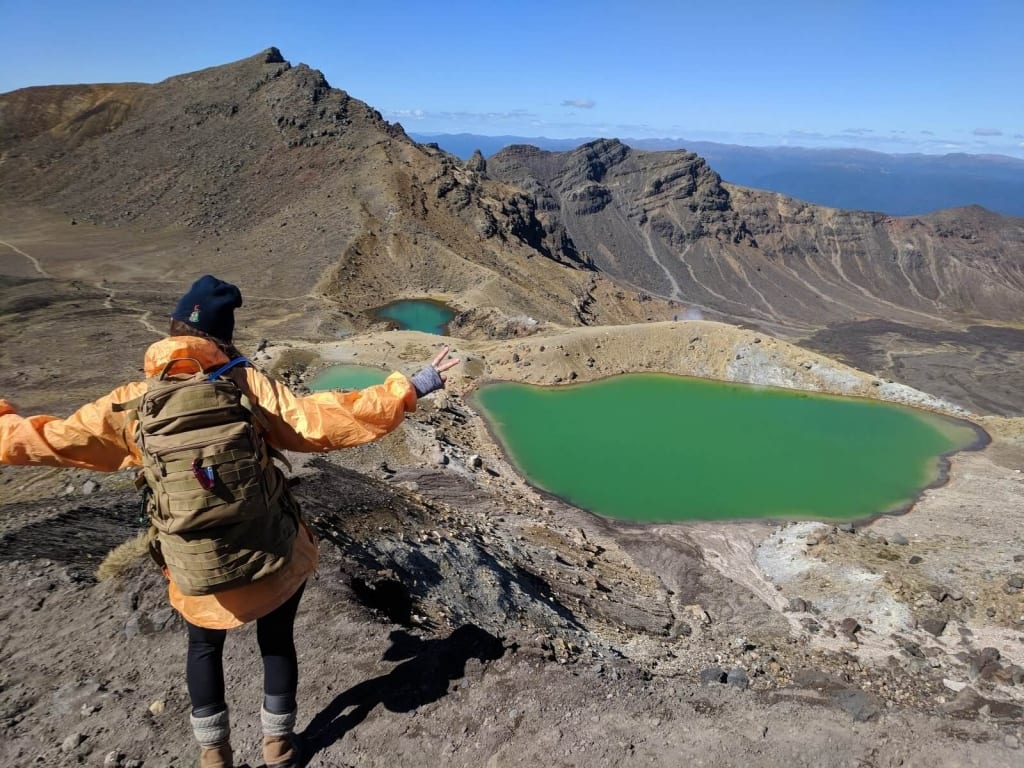 The trail you see going off into the distance continues on to another lake and the other side of the volcano as day hikers head back to their shuttle car. Those of us hiking the Northern Circuit separate from the crowds here as we pass through Emerald Lakes and descent into the lava filled valley below.

The lava fields on the way to the hut were like walking on the planet Luke Skywalker is from.

We stopped to walk in a sandy riverbed in hopes of some soft ground to film a yoga class. 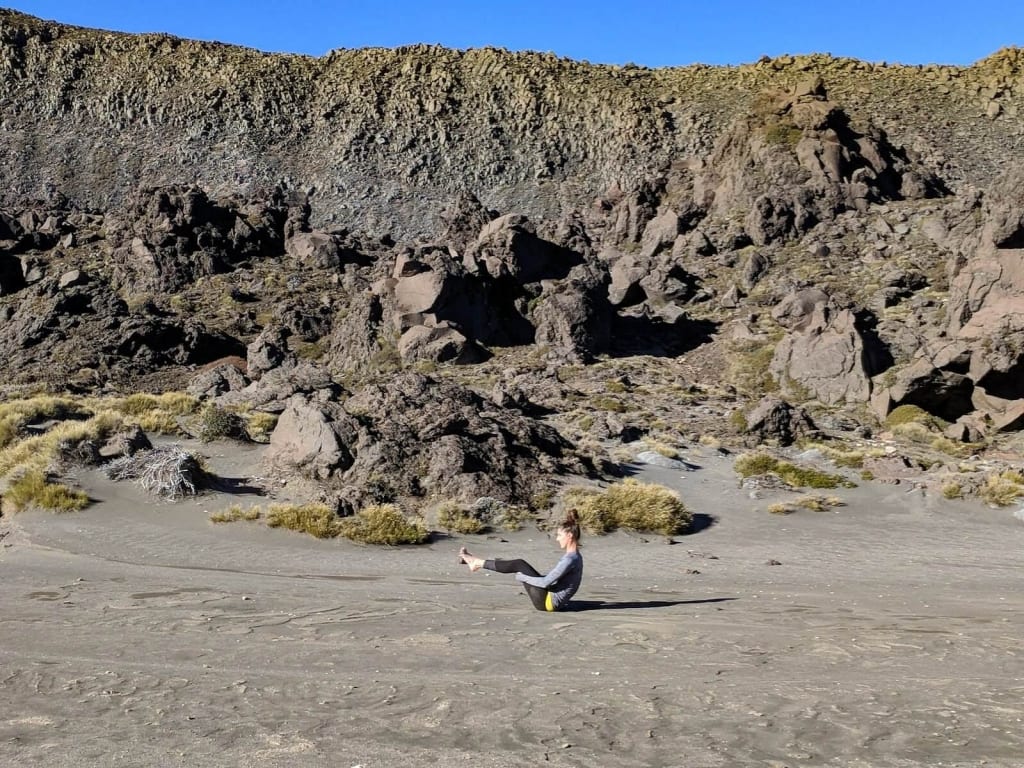 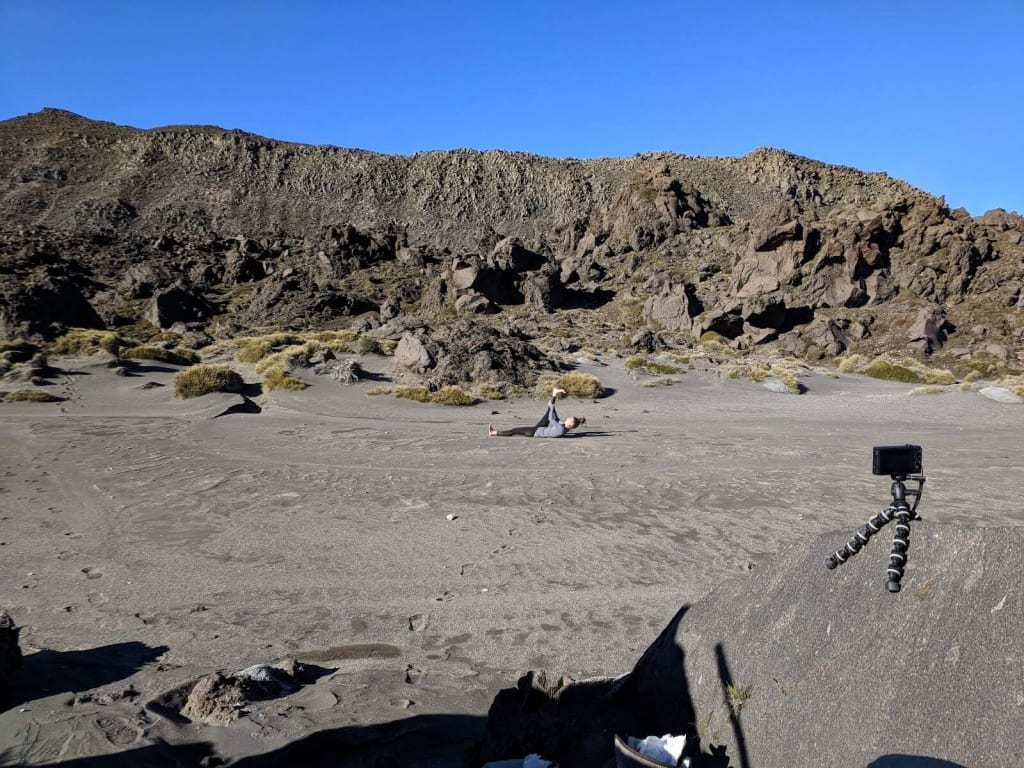 We camped the night by the Oturere Hut. We lucked out getting a spot at the edge of the cliff overlooking a waterfall. When we got to the Hut, a ranger was giving everyone a lesson on the volcanos, and passing around a bowl of fresh picked wild berries.

A big shout out and thank you to Amber and Brian for letting us borrow their tent, and Amber for letting me use her sleeping bag! Thank you both for being so prepared!

Our night at the Oturere Hut was the same volcano view, but the other side of the volcano.

Rise and shine… time to walk. 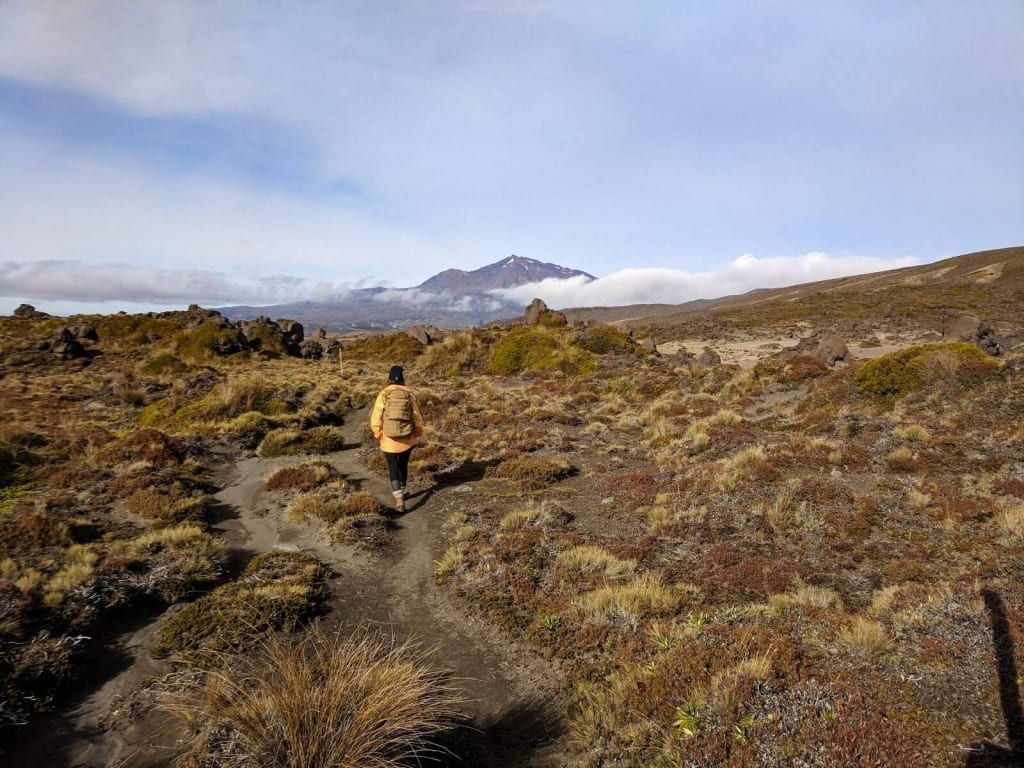 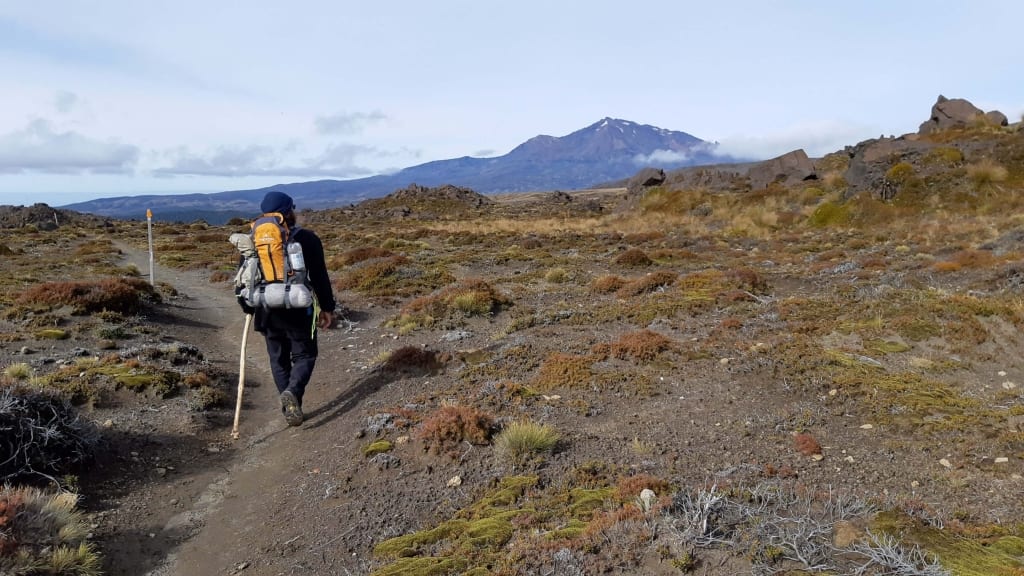 It was about 5 hours to the next hut, where those taking their time spend the third night. We took a short diversion to see the Old Waihohonu Hut. This was an old hut used by the Ruapehu Ski Club way back in the day. It’s hard to imagine this hut in the middle of nowhere once being the hub of the area. 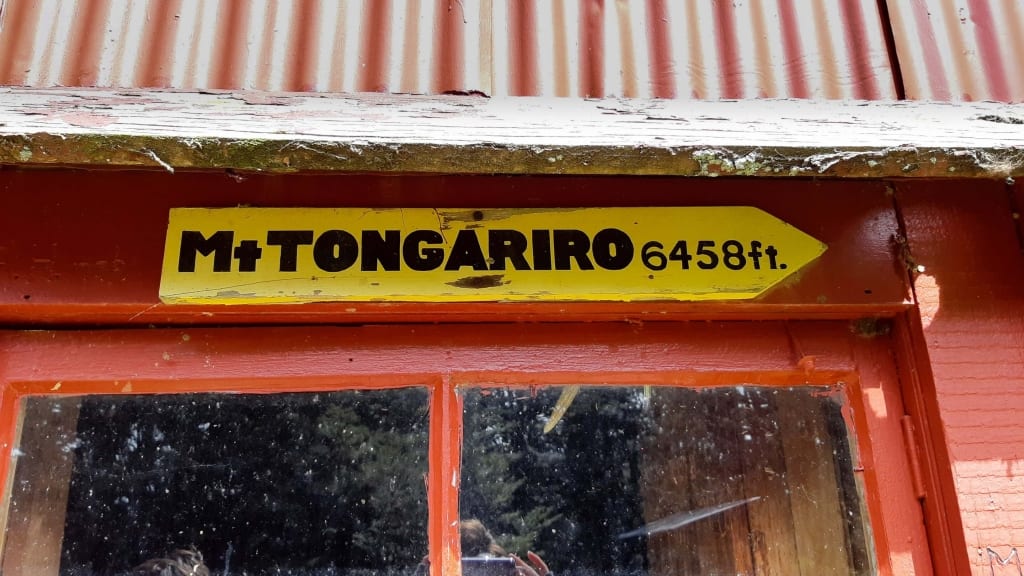 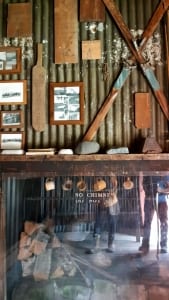 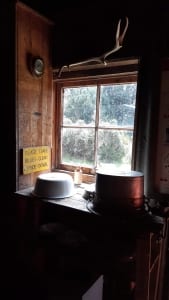 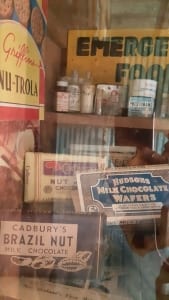 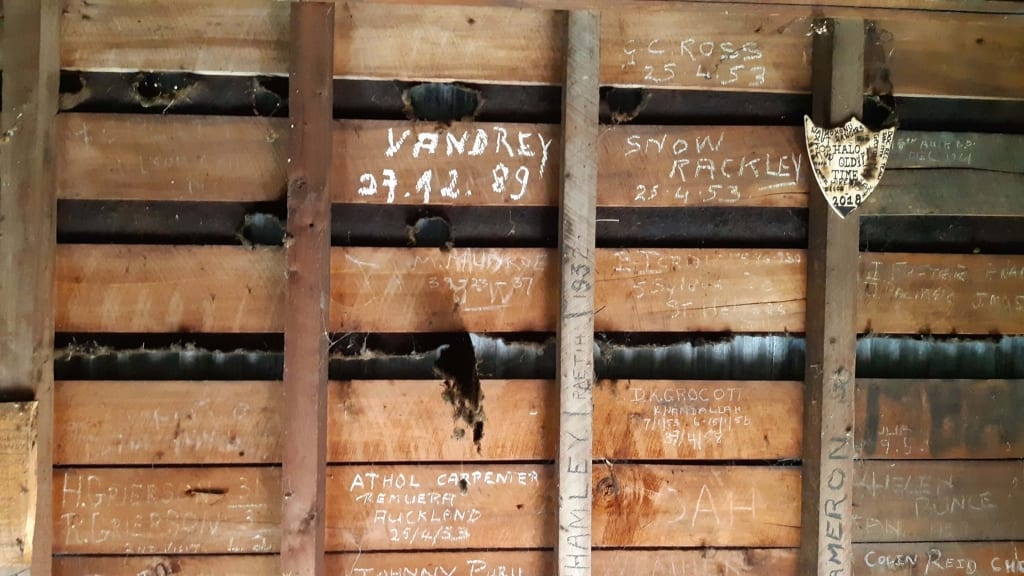 The names of ski club members, hikers and school kids are all carved into the wood of the hut. Those of my friends who have traveled to New Zealand know that Cadbury is a New Zealand chocolate (not British like most people think, and will enjoy seeing their old old chocolate wrappers. 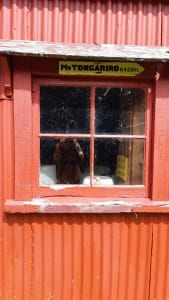 The new Waihohonu Hut is next to a river. The campsites are on the other side of the river from the hut, and there is also a heli pad here for emergencies.

Getting to the hut involves one tramp over a ridge through bush. The view on the way down is spectacular.

Parts of the walk between Oturere Hut and Tama Lakes looks like walking on the moon. 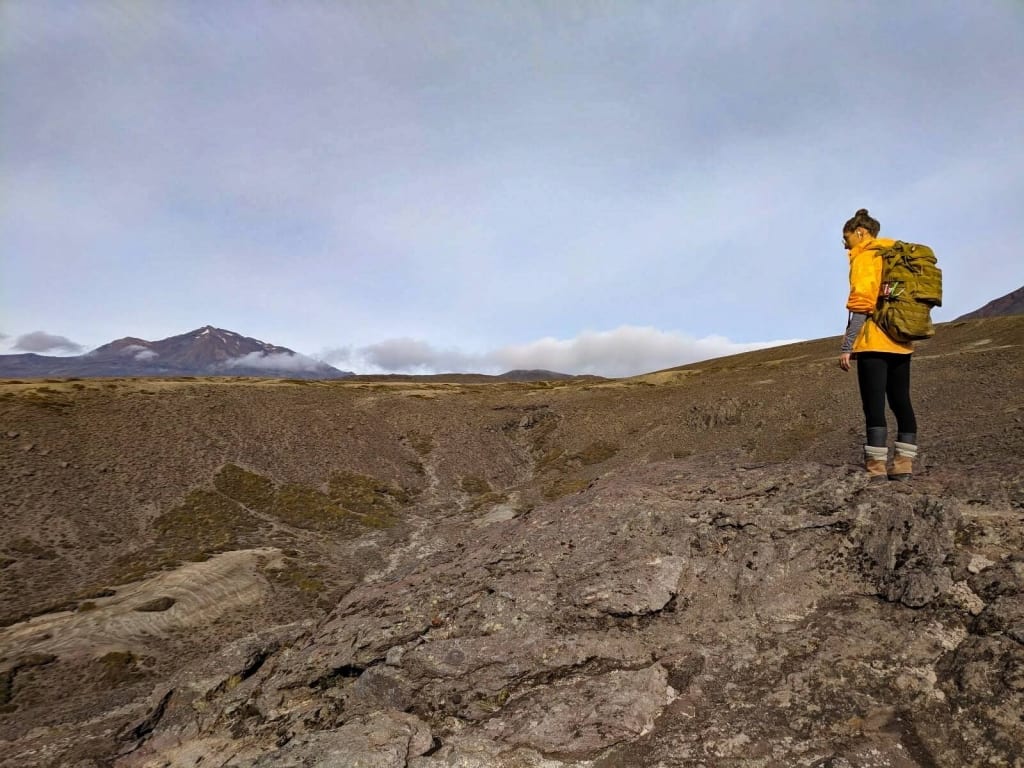 The last leg from Tama Lakes to Skotel was the hardest. Even though it was a different side of the Tama Lakes trek, and it was beautiful, Jordan and I were tired and it was raining.

Lower Tama was just over this ridge. At this point in the trek I was listening to a new podcast called Song Exploder and learning about MGMT’s hit Time to Pretend. You’ll see on my Strava that was the fastest time I walked the whole trip!

And here we are back in the familiar hills of the Upper Taranaki Track.

Being that I’ve lived and worked at Skotel since January and stare at Ngauruhoe everyday, I’m really glad I got to walk all the way around my favorite stratovolcano. Two days was a bit quick, but back at the hotel Jordan and I enjoyed burgers, a pitcher of black beer and showers! Well worth it. I’m looking forward to my next multi-day hike!