In the morning we drove down the coast to the Catlins. I’d been looking forward to seeing the Catlins for a long time. Ancient cliffs by the Sea on the Southern tip of New Zealand, and island at the end of the World…. On the road down, we stopped in Blaclutha for a New World stock up on groceries and catch last minute wifi. It was going to be a while before we had these luxuries again.

Or first stop in the Catlins was Nugget Point to see the Tokata Lighthouse. The weather was just beautiful. The ocean was showing off its many shades of blue and the nuggets were jetting out of the water as if they were just the rocky tip of something much bigger beneath the surface. The gentle incline up to the lighthouse showed off hidden caves in the Ocean below. 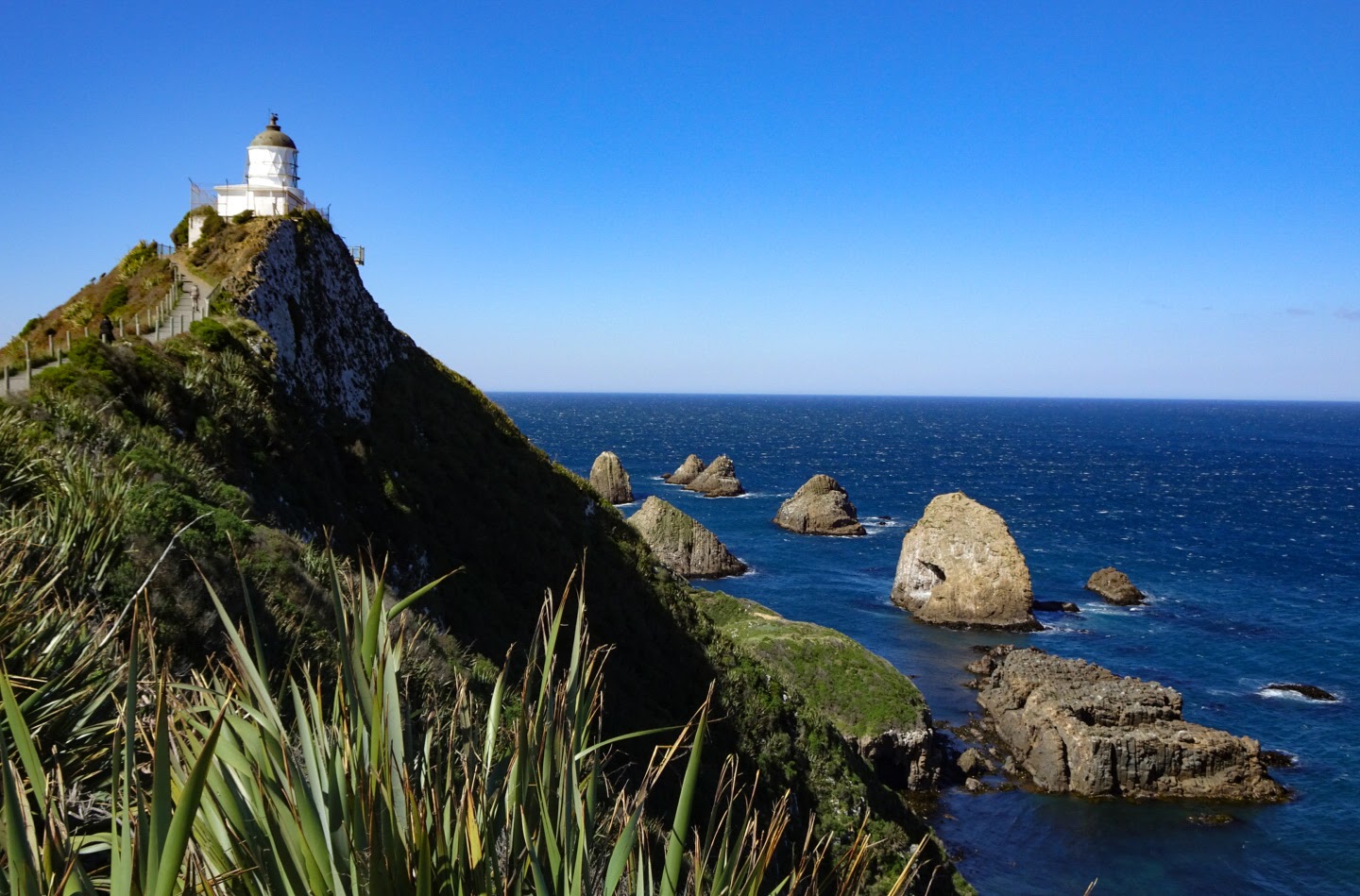 The Pete’s Dragon movie was filmed here, making it a real secret spot on the cover of every tourist map. 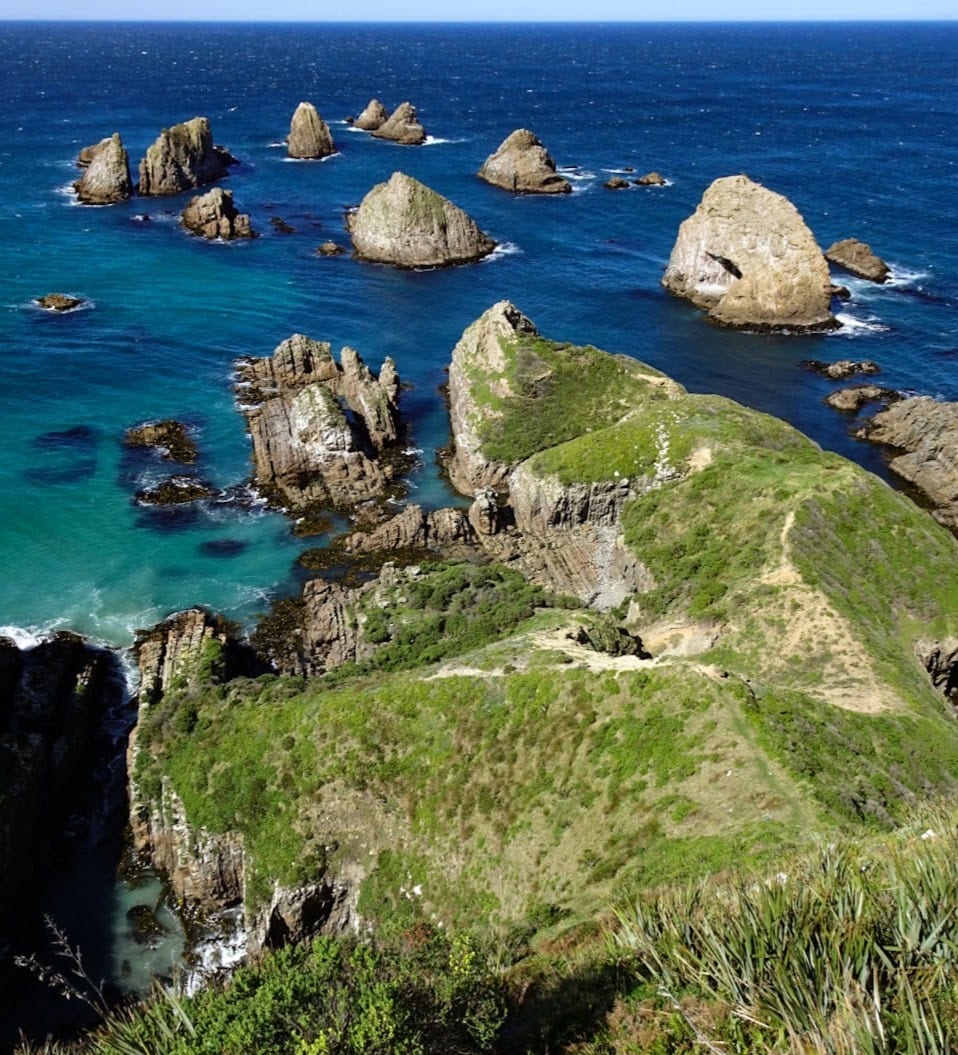 From the Tokata Lighthouse we headed down to Surat Bay. Advertised as a pleasant walk through the sand dunes, we expected sand dunes similar to the ones we slept on under the stars in Death Valley. We were disappointed to find the dunes we hard packed Earth covered in seagrass. Not only that but there were no sea lions to be seen. A hidden gem I would like to explore more is a cute Backpacker tucked away right on the Bay. 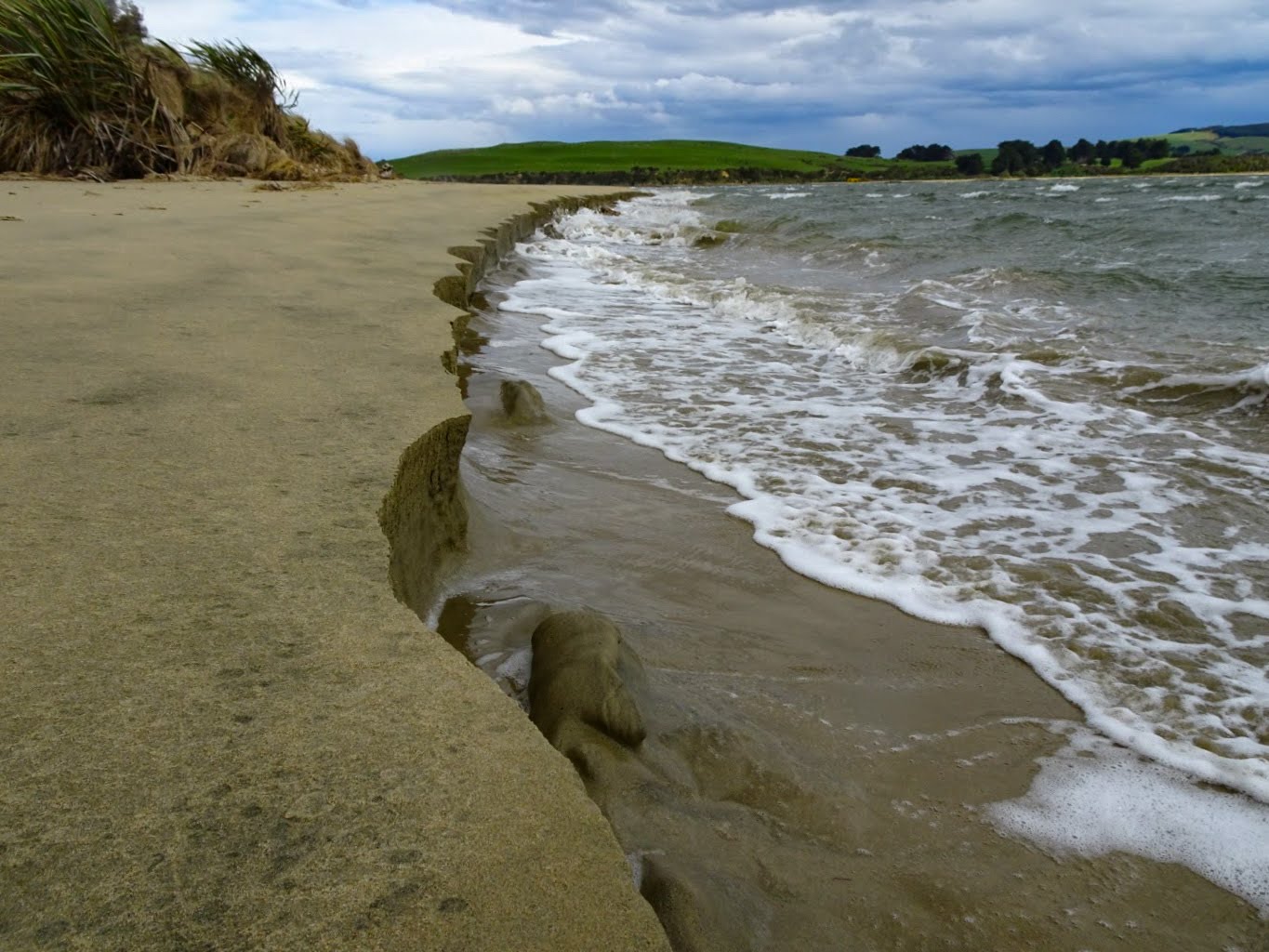 Overall, I’d say Surat Bay can be skipped. I did find joy, however, in the sharp chill of the waves with a stunning view of green cliffs dotted with lambs dropping off into the ocean. I’ve never felt so close to Antarctica. 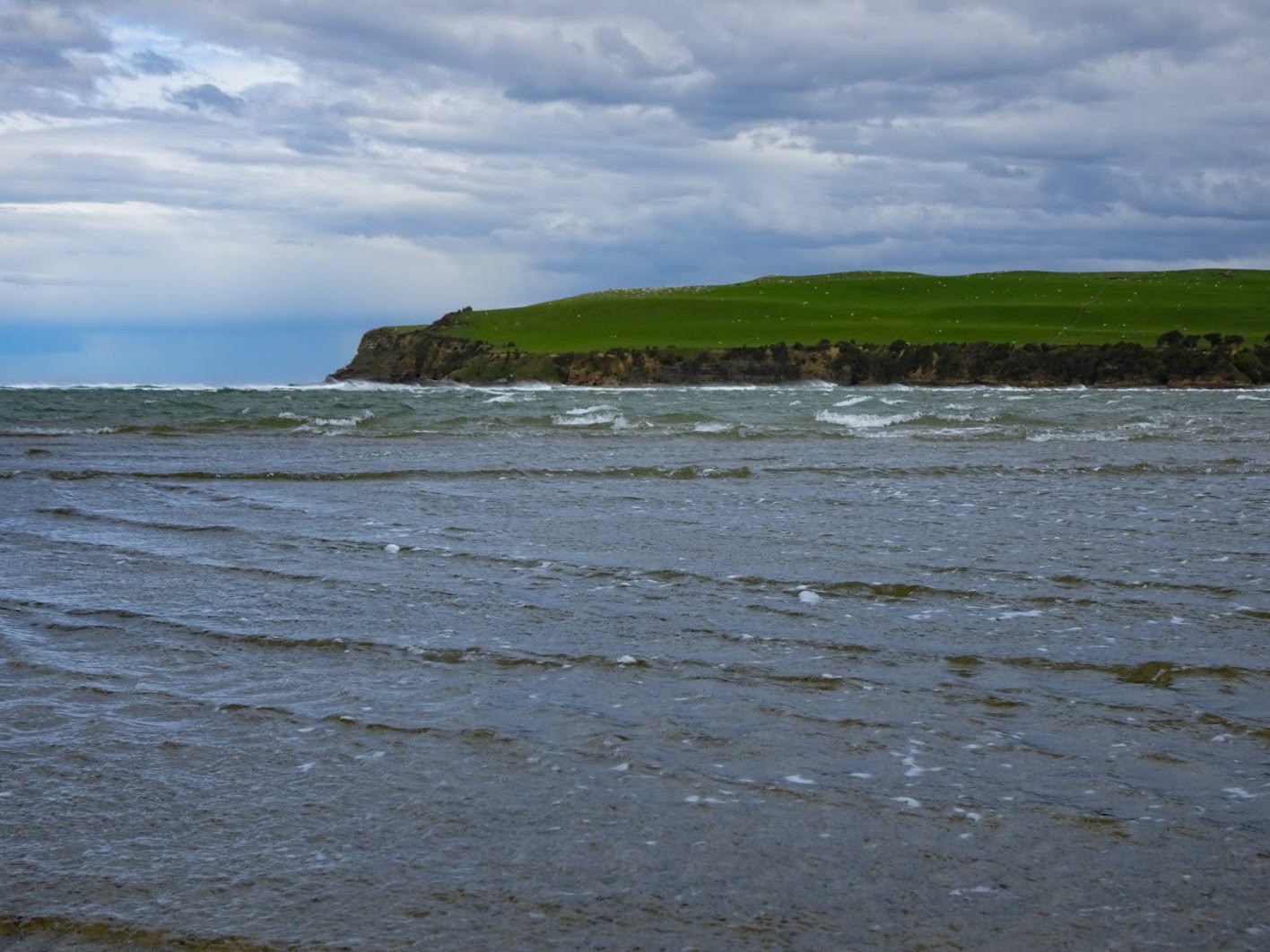 Next stop was Jack’s Blowhole. Jack’s Bay is exactly what I pictured New Zealand to be when I was living in LA. Limestone cliffs with sheer drops into the ocean and sparkling blue waves waiting to be surfed. 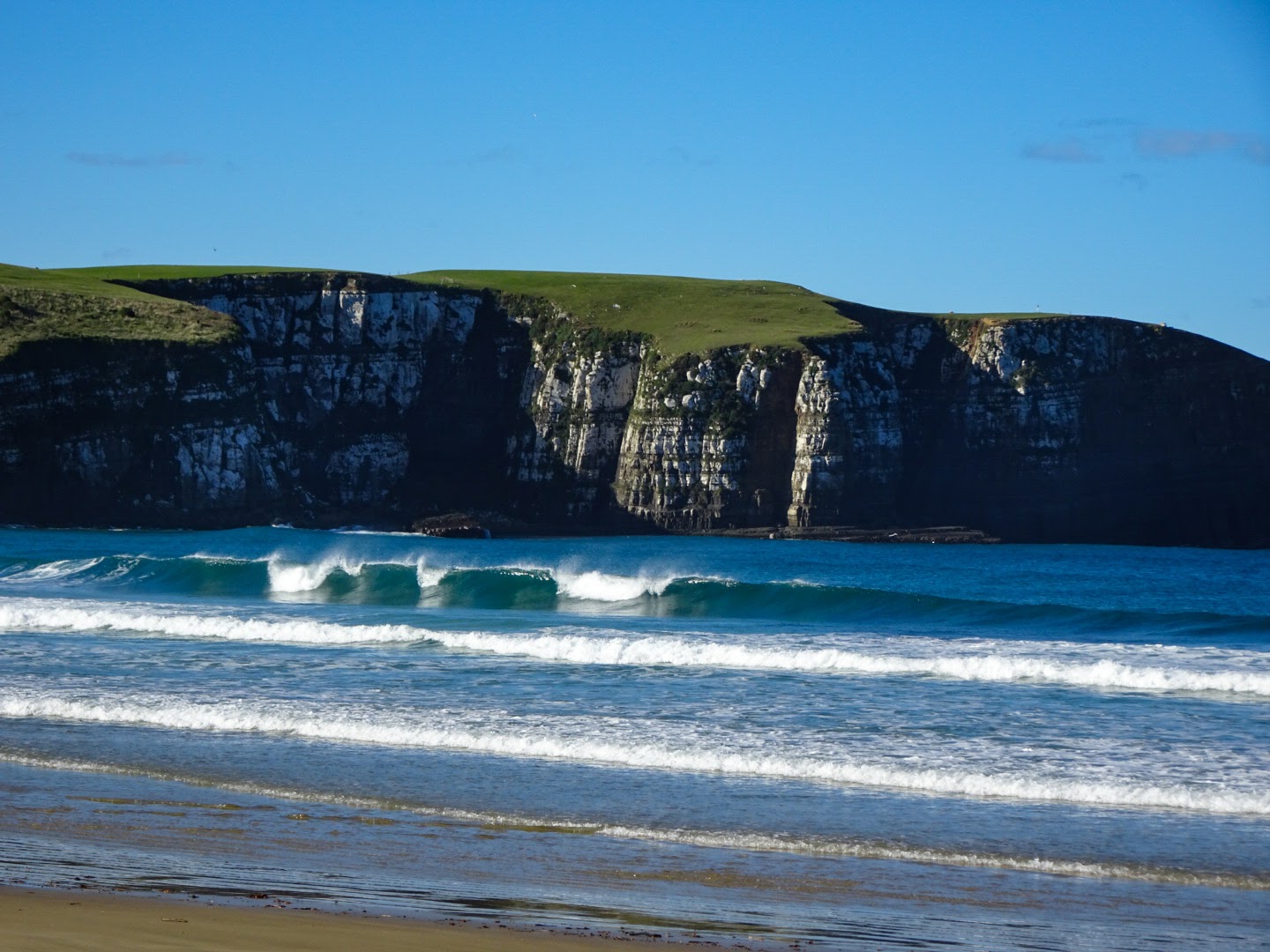 Driving Tip: This is a gravel road ok for non 4wd. Go back towards Owaka, but there is no need to go all the way back into town. Follow the signs for Jack’s Bay. You won’t see a sign reading blowhole for a while.

The hike to the blowhole is not for anyone who has trouble with inclines. There are a few cattle gates to climb over along the seemingly abandoned coastline. The views on this walk are highly rewarding. 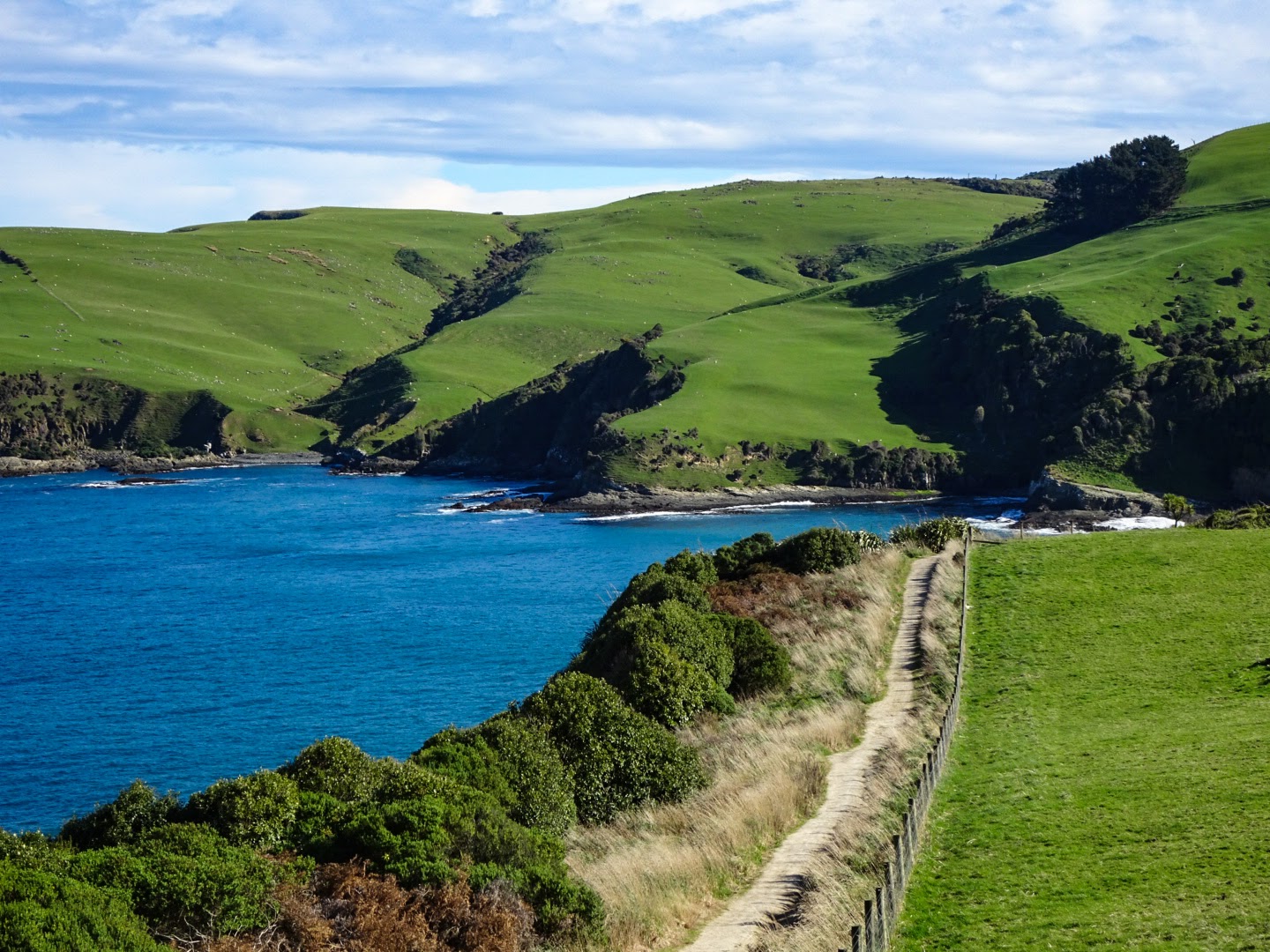 The ocean glimmered and winked as I walked on the edge of the cliffs above. It’s a 20 minute walk along the cliffs when suddenly the path turns inland. Up a hill, the sound of sheep becomes louder with every step. I thought to myself, this has been a long walk, I should almost be at the Blowhole…why am I going inland toward a farm?

I turned a corner and heard the rushing sound of the ocean rising from a tropical oasis in the middle of a field. Still, I could not see water. This is what makes Jack’s Blowhole magical. It’s like no other blowhole I’ve experienced before.
What did I expect? A blowhole out of rocks next to the ocean. What did I experience? A walk to the middle of no where, an unexpected tropical oasis adjacent to a sheep farm.

As I curved around the blowhole path, I could hear sheep on the other side of a line of trees to my right, and the power of the ocean waves deep down in the earth on my left. Once I walked a half circle around this mysterious blowhole, the trees opened up and my jaw dropped. 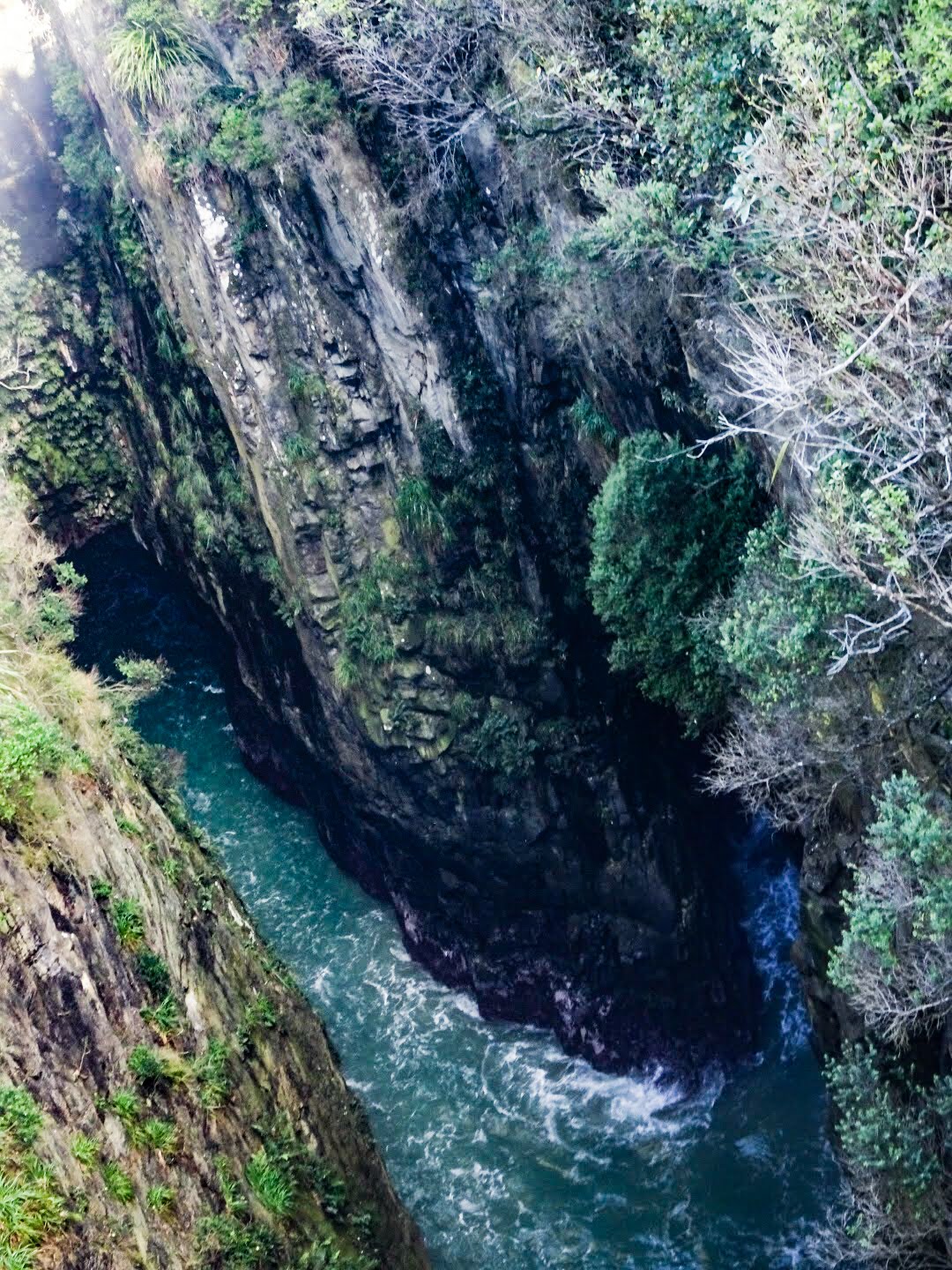 The 45 minute walk to the blowhole was vacant of people. Jack’s Blowhole is a true secret spot. Only those of us who are van lifeing it with all the time in the world would stop for this spot. Only those who appreciate slow travel would take the time to explore this magical nook at the end of the world. 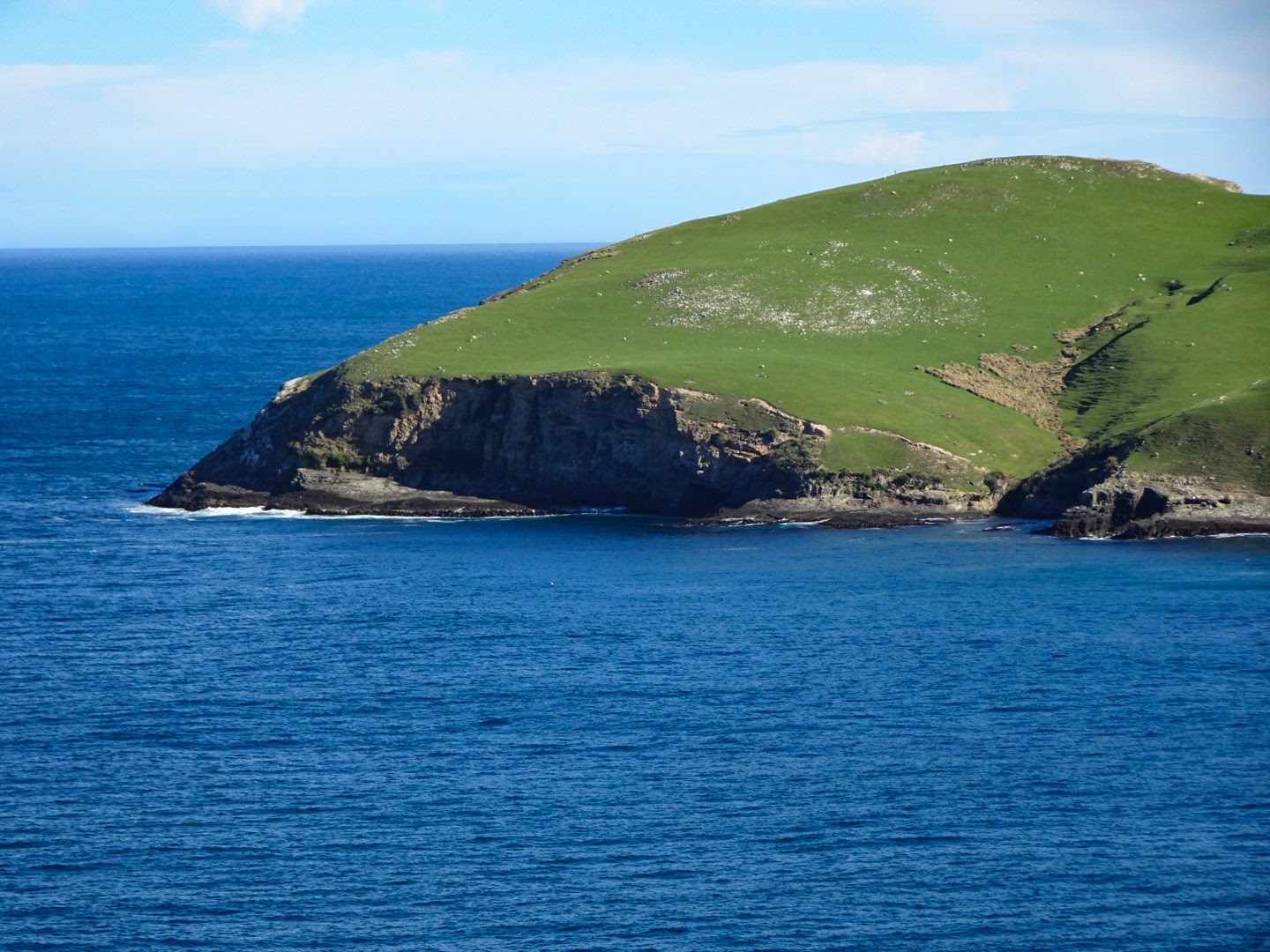 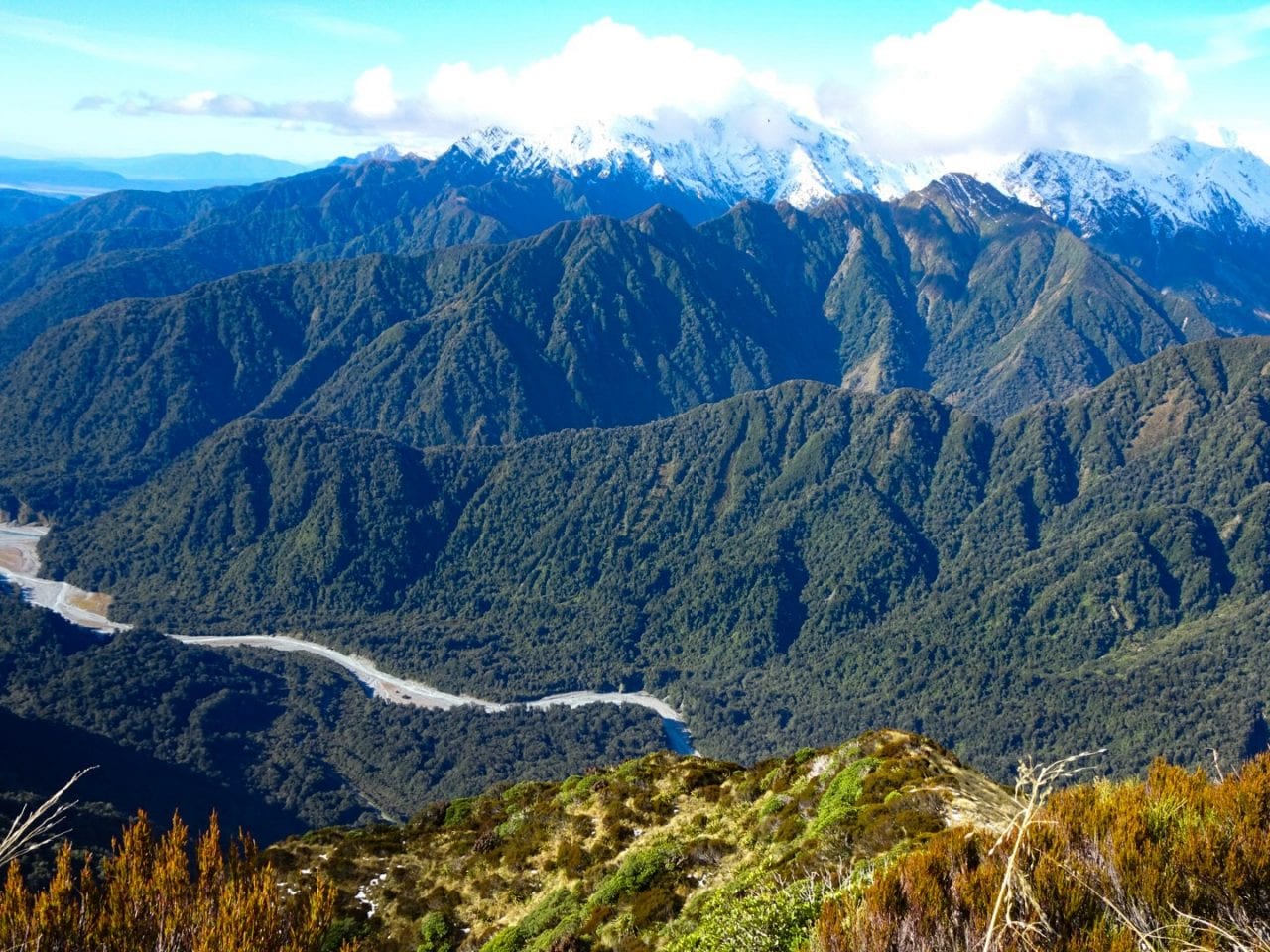 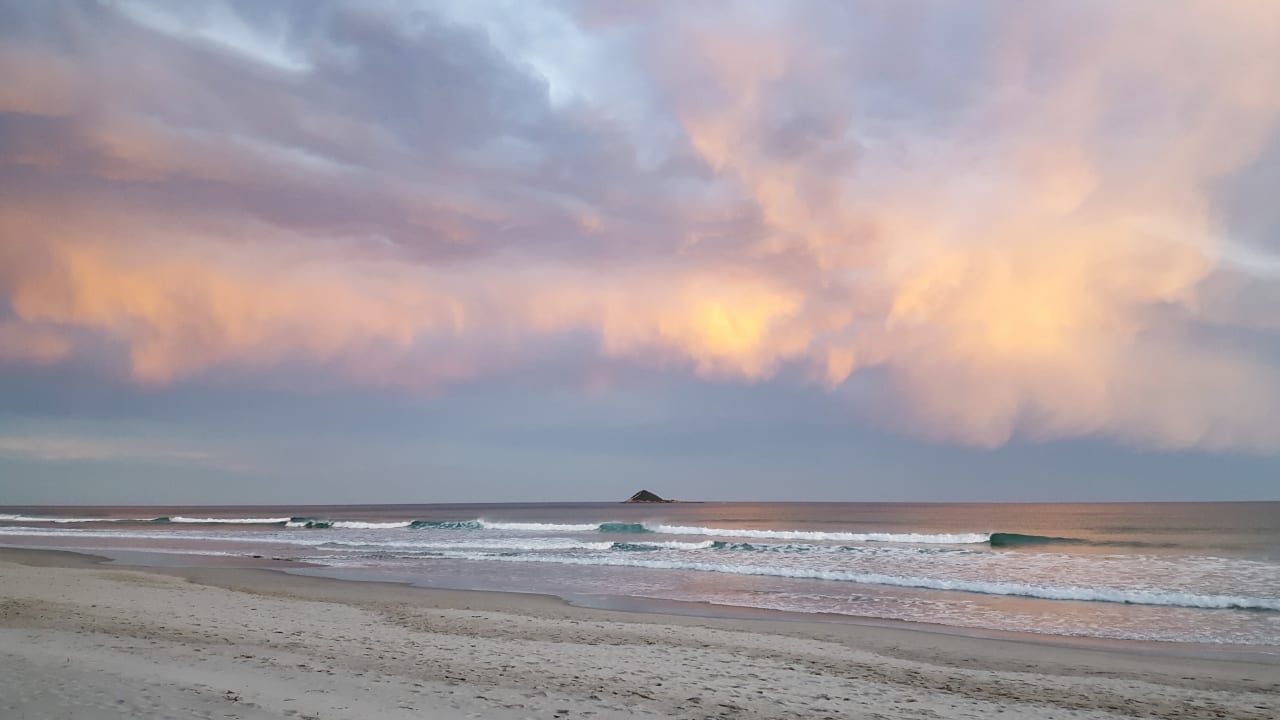 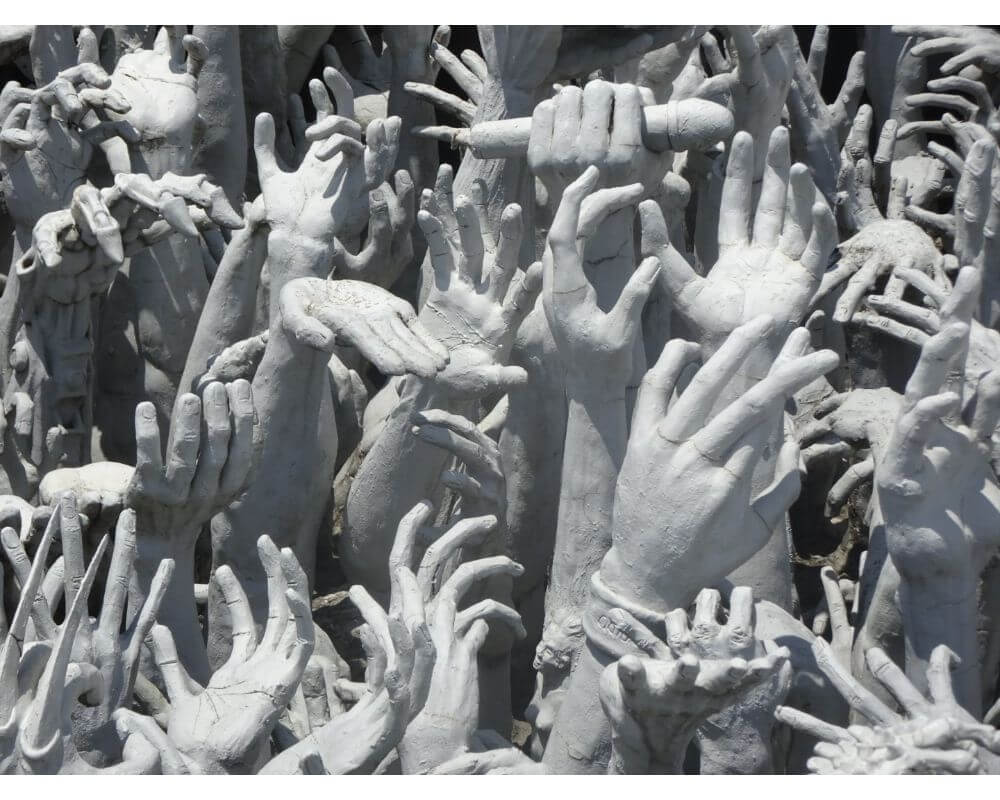 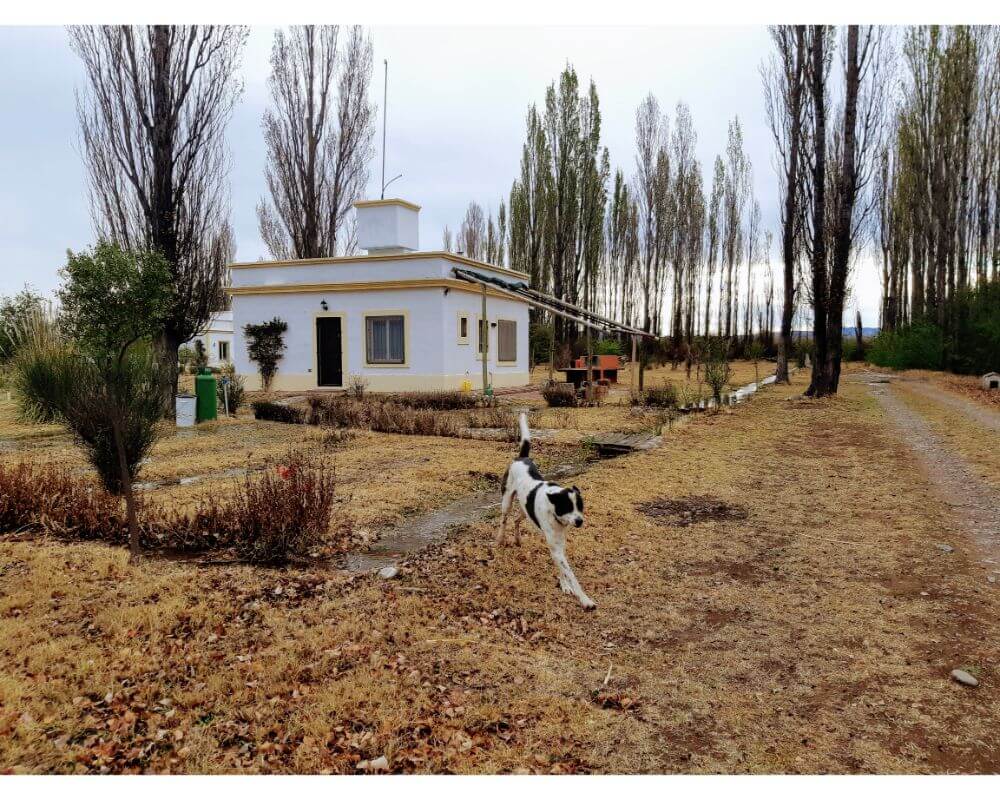 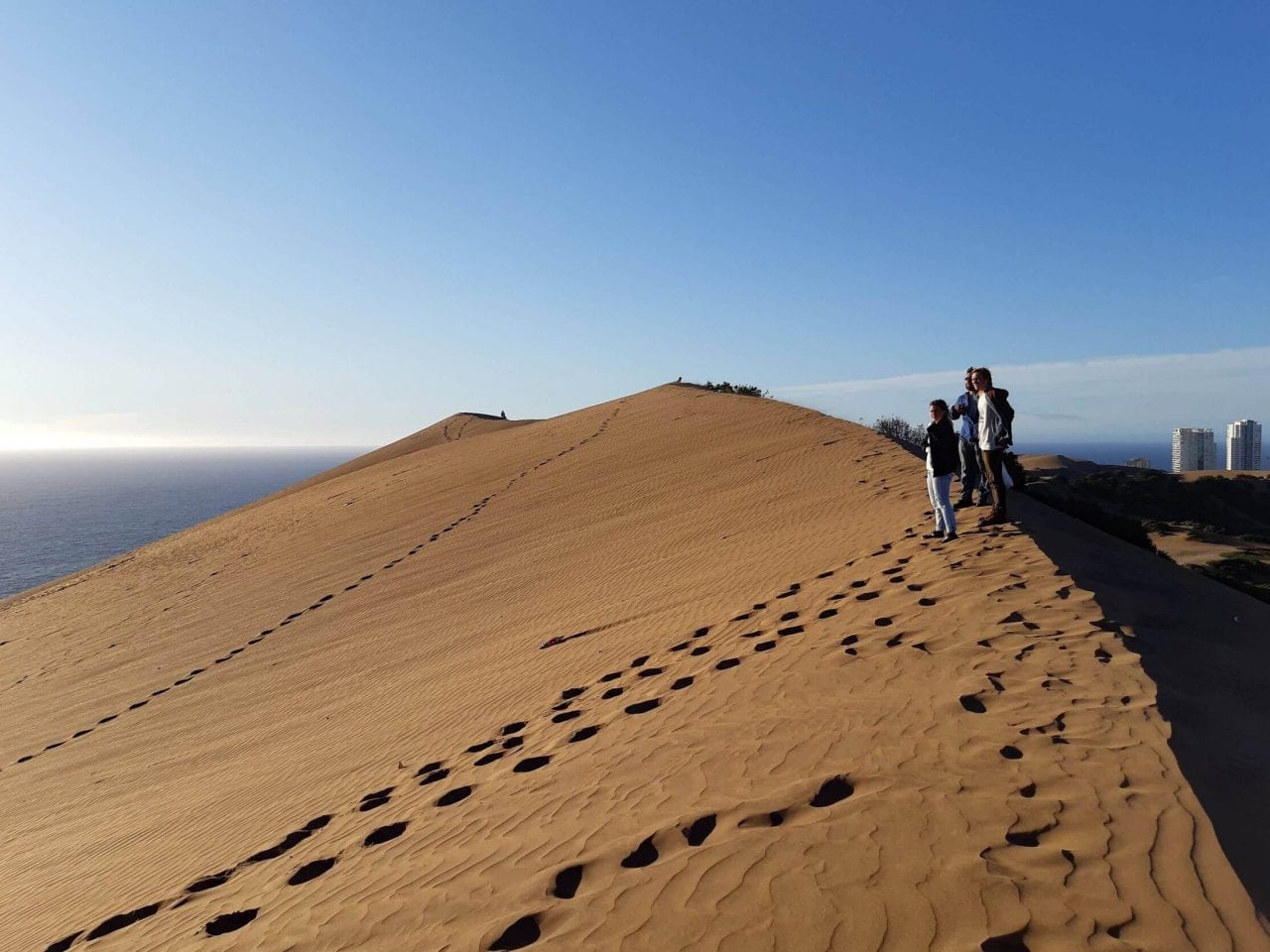